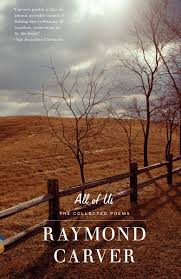 Raymond Carver is one of those open-the-door-and-come-on-in poets. Better known as a short story writer who reached his glory days in the 80s, Carver wrote poems that specialized in narratives, which should come at no surprise, given his start.

What do I mean by “open the door and come on in”? I mean his poems are welcoming and hospitable. He inspires would-be poets and poets alike by making it look easy. His free verse resembles broken up prose of a sort. Look for rhyme and meter at your own risk.

As for line breaks and enjambment, each functions nicely without the use of punctuation. Many unpunctuated poems trip readers up. Carver’s? Not so much. It’s too easy, smooth, intuitive.

Topic-wise, Carver was easy listening, too. Everyday life was his topic, whether by fiction or by verse. In a 1988 interview (he died of lung cancer that year on Aug. 2nd), he said, “Most of my stories, if not all of them, have some basis in real life. That’s the kind of fiction I’m most interested in. I suppose that’s one reason I don’t have much respect for fiction that seems to be game playing.”

It looks simple, reading it. Dialogue without the quotation marks. Doctor and patient, back and forth in a frank manner, ending with a finish where “habit” forces the patient to act in a manner that’s unexpectedly casual, given the gravity of the situation.

But unexpectedly casual is what makes the poem work. Bittersweet and poignant, it’s a gut punch moment made all the more realistic by the speaker’s final act in the final line.

Check and see for yourself. If you’re inspired by this relative ease of Carver’s poetry writing, try a dialogue crowned by action/thought/contrast poem yourself.

You’ll see just how difficult “simple” can be!

What the Doctor Said
Raymond Carver

One poetry-reading habit I have is looking up words I don’t know and writing their meanings as marginalia. Yes, I used to […]

It’s easy–too easy–to damn adjectives all to hell and preach the Word: Thou shalt scorn both adjectives and their brothers-in-crime, adverbs, when […]

Not writing? Heck. Not marketing writing, either. What is it about this winter of our discontent? And how did Steinbeck (via Shakespeare’s […]

What’s the opposite of a perfect storm? How about an imperfect sunny day? Certainly not the weather in Massachusetts yesterday, which was […]

2 thoughts on “How Difficult Simple Can Be!”