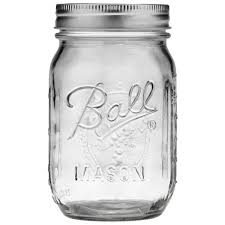 Last night my wife was making homemade chocolate–the kind you crown a scoop of vanilla ice cream with. Her chocolate factory was initially profligate, bubbling in a large saucepan, but she tamed it by pouring it into Mason jars.

Chocolate that rich begs for a smaller home like these little Mason jars, ribboned and destined for relatives and friends with a sweet tooth or two. Downsize rich chocolate, I always say, and no one’s objected yet.

With this saying still echoing in my head this morning, I read Wallace Stevens’ ode to a jar, one left out in the Tennessee wilderness. Give it a read-see, why don’t you?:

“Anecdote of the Jar”

I placed a jar in Tennessee,
And round it was, upon a hill.
It made the slovenly wilderness
Surround that hill.

The wilderness rose up to it,
And sprawled around, no longer wild.
The jar was round upon the ground
And tall and of a port in air.

It took dominion everywhere.
The jar was gray and bare.
It did not give of bird or bush,
Like nothing else in Tennessee.

A minor piece, as Stevens poems go (he being the darling of academic readers especially). Still, there’s that unexpected, pleasing-to-the-ear rhyming Wallace often injects in his works. And the notion of wilderness coming up to sniff a glass port of manmade (“a port in air”).

That something “gray and bare” could take dominion everywhere, despite giving neither bird nor bush, is disconcerting, which makes me wonder, as with much of Stevens, what he’s about here. Is the jar’s victory in its ugliness–ugly by dint of its surroundings? Juxtaposition is a powerful thing, after all, which is why I never stand next to handsome men, strong men, or successful men. Too jarring, if you catch my drift, and difficult on standers-by.

One might also ask what Wallace was doing in Tennessee. My favorite part of his being a poet was his daily job as an insurance executive in Hartford, Connecticut. Isn’t that jarring, too? Only which is the jar and which the wilderness–Stevens or a staid, 9-to-5 insurance office with his nameplate?

It’s the question of the day for you. If you need a jar opener, check the junk drawer….

As writers, we are the sum of our reading parts. Or so the thinking goes. Like Frankenstein’s monster, we are pieced together […]

The September 2018 issue of The Atlantic — a bit briny as usual — just beached itself in my mailbox and lo, there […]

No Comments “Jarring Wilderness for Future Use”