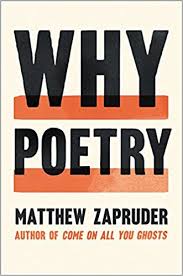 I spent most of yesterday afternoon and evening sick in bed. My bedside companion was not Nurse Nightingale, but Matthew Zapruder’s book, Why Poetry. Books read when your fogged brain has one lobe in Kubla Khan’s rich-scented gardens are always memorable, and this one distracted me mightily despite my dizzy spells and headache. I plan a series of posts here in response to some of the things I’ve read (and have yet to read). For today, a look at Chapter 2, titled after the Marianne Moore quote about poets: “Literalists of the Imagination.”

The chapter title itself is poetic. It should be, as it’s taken from Moore’s famous poem, “Poetry,” which features “imaginary gardens with real toads in them.” Using Marianne as his inspiration, Moore or less, Zapruder begins to riff on layreaders and how so many of them shun poetry because they find it difficult or mysterious. In short, they throw up their hands because the meaning is hidden and wonder aloud why poets have to play hide-and-go-seek with their purpose, anyway.

The damage is done in school, chiefly (schools, after all, are the scapegoats for most all of our woes… thus, Betsy DeVos). Darn those English teachers who constantly ask students to divine the meaning, the theme, the purpose, the symbolism, thus ruining a perfectly good poem. In Zapruder’s view, poems should be read for (brace yourselves) fun.

Of course, poems can’t be fun unless we know what the heck’s going on, so Zapruder recommends one essential tool to understand poetry: a dictionary. (You were expecting Siri or the dreaded Google search bar, maybe?)

“The portal to the strange is the literal,” he writes. Thus, as a teacher (most poets need full-time jobs, after all), he has students choose a word in the poem to investigate big-time, as in right down to its multiple meanings and history, or even, maybe, down to what it might have meant at the time that the poem was written.

Zapruder adds, “…the exercise of getting as deeply into the words as possible has the effect of showing them that this is the way into a poem, and that meaning and possibility come from that act, and not from some search for an interpretation someone else already made of the poem, that they have to figure out to get a good grade… It turns out that close attention to definitions and etymologies can be a portal to the power of poetry.”

From this paean to the literal’s eminence in an unexpected place — the genre of poetry — Zapruder goes on to say that many beginning writers of poetry get snared by the same misconceptions as layreaders. They purposely write in abstractions, mysteries, double meanings. They forsake the literal for the “deliberately obscure and esoteric.” It is, in short, a recipe for failure, just as reading poems strictly to interpret their coded language is a recipe for alienation.

Three cheers, then, for the literal and for taking poems at their word, both as readers and writers.

In my next column, I’ll discuss Zapruder’s ideas on how ordinary words can pull off extraordinary effects in a poem. I’ll leave you with the Mahmoud Darwish quote he uses as a hint: “Extreme clarity is a mystery.” But of course!

Talking to friends and family on the phone (and neighbors outside—at a distance), I hear the same refrain: These are awful times. […]

The reason Buddhism (whether you take yours as religion or as philosophy) is so Protean in nature is simple. At least to […]

The elegy is an elastic form. If we define it broadly, it can be any melancholy contemplation, though it is chiefly associated […]

Reading the new translation of Fernando Pessoa’s poetry, The Complete Works of Alberto Caeiro — especially the section called The Keeper of […]

No Comments “The Only Tool Needed To “Get” Poetry”