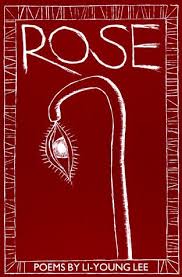 I’ve been poking around Li-Young Lee’s 1986 outing, Rose. The second poem in the collection — “The Gift” — is one of the more well-known ones. It showcases Lee’s knack for stylistic hybrids. The poem appears mostly narrative by nature, but there’s more to it, as the poem’s speaker pulls back from the story and looks down on it from the sky, if you will, giving the reader a bigger picture to play with. First, the poem:

To pull the metal splinter from my palm
my father recited a story in a low voice.
I watched his lovely face and not the blade.
Before the story ended, he’d removed
the iron sliver I thought I’d die from.

I can’t remember the tale,
but hear his voice still, a well
of dark water, a prayer.
And I recall his hands,
two measures of tenderness
he laid against my face,
the flames of discipline
he raised above my head.

Had you entered that afternoon
you would have thought you saw a man
planting something in a boy’s palm,
a silver tear, a tiny flame.
Had you followed that boy
you would have arrived here,
where I bend over my wife’s right hand.

Look how I shave her thumbnail down
so carefully she feels no pain.
Watch as I lift the splinter out.
I was seven when my father
took my hand like this,
and I did not hold that shard
between my fingers and think,
Metal that will bury me,
christen it Little Assassin,
Ore Going Deep for My Heart.
And I did not lift up my wound and cry,
Death visited here!
I did what a child does
when he’s given something to keep.
I kissed my father.

The opening stanza sets up the poem by taking us into the past to a moment when the speaker’s father removes a splinter from his palm. The child’s perspective is emphasized with the words “he’d removed / the iron silver I thought I’d die from.”

The second stanza reflects on the moment. Using metaphor, the speaker recalls first his father’s voice and then his father’s hands — each key to the successful removal of the splinter.

Stanza three bends hypothetical. What if the reader were there at that moment? What if the reader followed the trajectory of that boy’s life, all the way to the moment when he is a married man bending over his wife’s right hand for a similar reason?

The fourth stanza echoes the first. The apprentice child is now a small hero looming large, too, like his father in that he repeats the same magical moment, offering the same small gift.

Then the negatives. Through contrast they sharpen the neighboring positive all the more. The speaker says:

I did not hold that shard
between my fingers and think,
Metal that will bury me,
christen it Little Assassin,
Ore Going Deep for My Heart.

Then the second negative wave: “And I did not lift up my wound and cry, / Death visited here!”

Followed by the positive: “I did what a child does / when he’s given something to keep. / I kissed my father.”

That something to keep is the gift, but it is not a physical one wrapped and bow-tied. It is a way, as Lao-Tzu might describe it. Something passed down but not held, evident but unseen, and warm as a pair of hands when they hold each other.

Yesterday we looked at Rainer Maria Rilke in advice mode. Not everyone fancied his advice, of course. John Berryman proclaimed Rilke “a […]

Ekphrasis, according to The Oxford Classical Dictionary, means “the rhetorical description of a work of art.” And Edward Hirsch, in his hefty […]

One of the great things about being a feral poet–one that wouldn’t know M, F, or A if he fell over them–is […]

Should religion and poetry be kept in their respective corners like church and state? Yes and no. First, let’s dispense with the […]