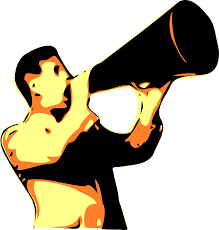 Note: The following is written for hounds trying not to bay like the Baskervilles. It explores Aristotle’s philosophical conundrum: Can you self-promote your work without looking like you’re self-promoting your work? Heed, then, the “sound” of trees falling in the wilderness….

I’ve written before that a part-time poet (full-time poets, like unicorns, are rare beasts indeed) needs to be talented in more ways than one–chiefly as a marketer/business person in addition to the obvious as a writer/artistic person. I always considered “marketing” to be a matter of just sending out poems to journals and presses, but it’s more complicated than that. Marketing also means being a publicity hound, an aspect of writing that makes me a little queasy as a necessary evil.

An example is in order. Before my poetry manuscript was accepted by a publisher, I was just another humble reader (without an author page) on Goodreads. As a GR participant in those days, I was often annoyed by authors seeking to promote themselves and their books in hamfisted ways.

In the immortal words of Daffy, all of these come-ons led to a single recourse: “Duck!”

Like others, I learned to avoid these (mostly self-published) author requests and demands at all costs. Thus, when authors sent friend requests, I usually demurred on the assumption that another shoe would drop if I dared to say yes.

Still, I was conflicted. And in many cases I said “yes” anyway, especially if I had some interaction previously with the author as a fellow reader and book-lover.

Now the shoe is on the other foot. Now I am probably viewed in the same manner by some GR reader/posters wary of all authors due to a few overzealous ones. Now I am the one with books in need of publicity but in a classy way.

The question, though, is this: Do “classy” and “publicity” mix?

The answer depends on who you talk to, I’m guessing. I learn from other authors in situations like mine. Some are cool about it, and I seek to emulate their subtle self-promotional ways.

Many use blogs, where readers are welcome to visit, read, and follow links or not (as opposed to charging like bulls into Goodreads china shops shouting, in so many words, “Me! Me! Me!”). And, most importantly, some remain as much fellow readers as self-promoting authors, thus presenting their Goodreads biblio-social graces in the best light.

As for Facebook and Twitter, I still haven’t figured out a classy way to self-promote in those venues. All the experts say they are a must, but experiences in both places were negative for me, so I’m on the sideline contemplating, leaving that turf to the Russians, who are much better at it than me.

Meantime, the blog and the links leading to my books. If you’ve come this far, you probably have a genuine interest in my work and will read a new poem that recently hit the web (warning: self-promotion ahead!). Called “It’s the Fourth of July,” it can be found in an e-zine that deserves promotion for its support of prose poetry (or poetic prose, or however you want to call it), Unbroken Journal.

Bottom line? The best promotion–for authors and journals alike–comes in the form of promotions from others as opposed to ourselves. That much is obvious and goes without saying, but I’m going to say it anyway.

Still, “self-” comes before “from other sources.” It is a necessary part of the game. Why? Because, in poetry, where the field is so crowded and the general readership so low, you could grow old and die before promotions come in from other sources.

Better to keep writing. The more there is to publicize, the better the odds of something taking.

If you’re tired of empty phrases like “Build a Wall” and “Make America Great Again,” you might consider Tony Hoagland’s America for […]

As Confucius never said, “A two-fer is always better than a one-fer.” In poetry-speak, this means it’s all well and good to […]

Should religion and poetry be kept in their respective corners like church and state? Yes and no. First, let’s dispense with the […]

For many decades, I was a plainclothes reader of poetry. I took a course at university, like people do, but wasn’t terribly […]

No Comments “Publicity Hounds from Hell”