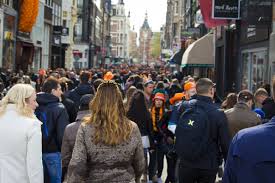 Sometimes you just have to be kid-curious to write poetry by saying, “What if?” and “Imagine that….” Rest assured if you are a poet walking on crowded city sidewalks, you are not thinking the same things as the folks looking down at their Palm Gods (read: cellphones). No. Your mind is moving faster than you are, turning at every bend, allowing no law of physics to get in your creative way.

In a follow-up to yesterday’s Wislawa Szymborska’s poem, here’s another that has, whether she intended it or not, a distinct samsara flavor.

Thoughts That Visit Me on Busy Streets
Wislawa Szymborska

Faces.
Billions of faces on the earth’s surface.
Each different, so we’re told,
from those that have been and will be.
But Nature—since who really understands her?—
may grow tired of her ceaseless labors
and so repeats earlier ideas
by supplying us
with preworn faces.

Those passersby might be Archimedes in jeans,
Catherine the Great draped in resale,
some pharaoh with briefcase and glasses.

An unshod shoemaker’s widow
from a still pint-sized Warsaw,
the master from the cave at Altamira
taking his grandkids to the zoo,
a shaggy Vandal en route to the museum
to gasp at past masters.

One brought here in a golden carriage,
another conveyed by extermination transport,
Montezuma, Confucius, Nebuchadnezzar,
their nannies, their laundresses, and Semiramida
who speaks only English.

Billions of faces on the earth’s surface.
My face, yours, whose—
you’ll never know.
Maybe nature has to shortchange us,
and to keep up, meet demand,
she fishes up what’s been sunk
in the mirror of oblivion.

I like all the cameos here by famous people—people kind enough to share their faces with contemporary Warsaw, mind you. I had to look up Altamira to see that it is an ancient cave filled with caveman (and woman) canvases (rock on!) that might hang in the Prado if cave walls could move. As for Semirada, an opera, it appears, starring a queen of same name. Maybe Szymborska was a fan of the opera. Me, I give it a wide berth, being the Vandal that I am.

Face it, you could do worse than let your mind wander to strange wonders today. Whimsy is on the same shelf as poetry, after all. Just ask Dewey Decimal.

Poetry serves many purposes, but one of my favorites is as facilitator of questions and possible answers. Why? Because the answers are […]

“The mass of men lead lives of quiet desperation.” Thoreau. And the epigraph to my first book of poetry. I will forever […]

One of the themes running through Gregory Orr’s book,  Poetry as Survival, is the role of trauma and adversity in the creative […]