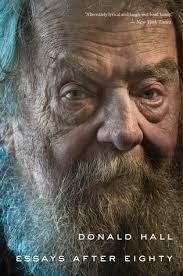 God has this little addiction. It’s called irony. Like O. Henry (only with more staying power), She can’t help herself when it comes to trick endings, little twists, wry surprises. Big G, they call her. Big “Gotcha!”

I was reminded of this while sailing through 85-year-old Donald Hall’s collection, Essays After Eighty. Folks who like poetry know that Hall was a poet of some renown. As happens, he married another poet — one 19 years his junior —  Jane Kenyon. Jane knew her way around an iambic and could leap pentameters with flair as well. Poetically speaking, it was a high-profile and poetically-inclined marriage.

“In middle life I came close to dying of natural causes. When I was sixty-one I had colon cancer, deftly removed, but two years later it metastasized to my liver. A surgeon removed half of that organ and told me I might live five years. Both Jane and I assumed I would die soon, and she massaged me every day, trying to rub the cancer out. I went through the motions of chemo and finished writing what I was able to finish. Aware of my own approaching death, I was astonished and appalled when Jane came down with leukemia. Her death at forty-seven — I was sixty-six — was not trivial. Six years later I had a small stroke and potential death felt matter-of-fact. A carotid artery was eighty-five percent occluded. Dr. Harbaugh removed a pencil-wide, inch-long piece of plaque during a two-hour operation under local anesthetic. I enjoyed hearing the chitchat of the white-coated gang. Now and then somebody asked me to squeeze a dog’s ball, which tinkled to affirm my consciousness. I was disappointed when Dr. Harbaugh wouldn’t let me take the obstruction back home.”

Elsewhere in the book, Hall mentions how Jane wrote three poems about his fatal illness and imminent demise. You Know Who was listening, apparently. Either that or She fancies poetry.

And bam. Next thing you know, the doomed lives twenty-eight more years (dying in 2018) while the prime-of-life wife and rising-star poet is gone in five  (dying in 1995). Funny? Hardly.

“Life,” the atheists would call it.

“Death,” the Stoics would murmur back.

Sadly, it’s all one. Especially when you consider God’s little addiction, the all-too-personal “I” word.

Up until two summers ago, when I heard this ungodly racket from the pine tops around our Maine cabin, I’d never heard […]

This week I picked up Ocean Vuong’s new book, On Earth We’re Briefly Gorgeous. It’s listed as “a novel” on the cover, […]

I spent most of yesterday afternoon and evening sick in bed. My bedside companion was not Nurse Nightingale, but Matthew Zapruder’s book, […]

Two cheers for the pronoun “I” in poetry! OK. One cheer, maybe? The upstanding pronoun has been under attack in some quarters […]