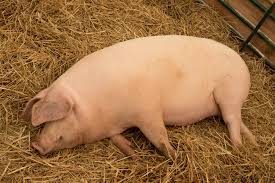 Last week, via her poetry column in the New York Times’ Magazine, Rita Dove introduced me to the poet Jenny George, who published The Dream of Reason (Copper Canyon Press) just last year.

Being the sort to pass along good news when I read it, I shared George’s poem “One-Way Gate” on these pages—a poignant piece about cattle being taken away for slaughter.

It’s unusual to come across a poet who writes the plight of farm animals raised to become a Quarter Pounder with Cheese at McDonald’s. When I got my hands on Jenny George’s collection a few days ago, I found many more on the theme of dignity for the common cow and pig.

Who speaks for them, after all? And who thinks of poetry as being a vehicle for their voices? Not this guy. Until now, that is.

To supplement last week’s poem, then, here are two more from The Dream of Reason:

“The Sleeping Pig”
by Jenny George

It is easy to love a pig in a nightgown.
See how he sleeps, white flannel
straining his neck at the neckhole.
His body swells and then deflates.
The gown is nothing to be ashamed of, only
the white clay of moonlight smeared
over his hulk, original clothing, the milk
of his loneliness. The flickering candle
of a dream moves his warty eyelids.
All sleeping things are children.

The “nightgown” is a bit confusing until you reach line six, where you realize it is “the white clay of moonlight / smeared over his hulk, original clothing, the milk / of his loneliness.” Then the image pays off. As does the final line, a truism that covers even pigs sleeping in lunar nightgowns.

From the farm we move to the abattoir, which for the small farmer is the farm itself. It’s a strange and still place for a poem. Let’s see how George negotiates the challenge:

The pig is already dead.
It hangs from the ankle,
slumped as light
through a heavy curtain.
Draped onto the slab.
One ear folded like a lily
under the ample head,
pressed nearly in half,
silent origami.
The other ear,
large as a trumpet flower,
turned open as if to receive
the sound of a distant thing
approaching—
a train through fall fields,
an insect in forgotten rafters
droning its thin scarves of sound.
The one ear
bent shut, weighted
under the pig’s last greatness.
The other, supple horn,
listens outward, catches
the squeal of the gate hinge.

There are some lovely similes and metaphors here, especially ones related to the dead pig’s ears. And those “thin scarves of sound” — not only a nice metaphor, but a neat sound device!

Most impressive to me, however, is the final line, specifically the word choice of “squeal” — a word associated with pigs — for the sound of the gate’s hinge.

Simple, unassuming, powerful. What poetry does. And in the strangest places, too.

From an early age, we are attuned to our special day, our birthday. We remember nothing of that perilous journey, of course, […]

I like reading poems that go where angels fear to tread. One such category would be dog poems. As a subject in […]

Poetry is one of those things people love to pronounce as dead. They officiate over it in most un-poetic sermons. They swing […]