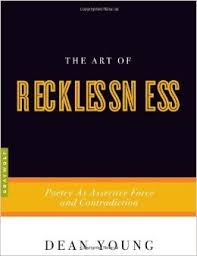 Here’s my review on Dean Young’s _The Art of Recklessness_. I read it because I could use a little shaking up. Hell, everybody can. Seems everyone’s writing the same poem sixty-seven different ways (that look amazingly similar), my and self included. Young, who has a facility for flights and fancies, makes it look easy–then talks about it as if it’s easy. If you’re interested in his little book, here’s a preview:

What? There’s an ART to being RECKLESS? Seems I took no classes as a kid, as a teenager. I just had at it, the devil take the hindmost (because he seemed little interested in the foremost). The title, though, is chosen because it is part of Graywolf Press’s “Art of…” series. Dean Young (who else?) got the call for recklessness because, well, HIS recklessness (called “poetry” in some rhomboids) is quite artful. Came this close (holds fingers an inch apart) to winning the Pulitzer Prize for his collection, [book:Elegy On Toy Piano|147931].

What did I gain from this book? A lot of what, a bit of why, but not much how. That is, if you’re looking for Dean to share secrets to his controlled anarchy, keep looking. Instead, he shares a few opinions on the wild and the crazy, on the Dadas and the Surrealists. And though he claims John Ashbery to be our greatest modern poet, he mentions him but once, giving the lion’s share of attention to poets we don’t immediately consider when we think “reckless”: John Keats (with his wild and crazy Odes), William Wordsworth (who never met a word he didn’t consider worth writing down), and Walt Whitman (leaves and the grass electric).

“If the poet does not have the chutzpah to jeopardize habituated assumptions and practices, what will be produced will be sleep without the dream, a copy of a copy of a copy,” The Dean of Recklessness tells us. He also is a great cheerleader. Any poet would love to have him as a teacher (U of Texas, Austin, methinks). “Our poems are what the gods couldn’t make without going through us.”

Dean Young may seem playful as hell in his poetry, but this book can be scholarly as all get-out at times, throwing around some big-boy words (the kind where I say, “Huh?”). He also quotes with abundance. Here’s a Wallace Stevens, for instance: “It is necessary to any originality to have the courage to be an amateur.” Oh, I love it. <i>The Art of Being an Amateur</i> I have nailed! Where do I begin collecting checks and raves?

And there’s humor here: “Poetry, as everyone knows, is in competition with girls’ volleyball for the crowd. It’s all about numbers… And in regards to the common bellyache that the only audience for poetry is poets: but it’s been noted by many that poetry is like a foreign language; you need to learn grammars and idioms to get it, so what’s so terrible about people who know Portuguese being the people who are interested in listening to and reading Portuguese? Arcane specialization? Elitism? Surely no more than girls’ volleyball. Poetry’s greatest task is not to solidify groups or get the right people elected or moralize or broadcast; it is to foster a necessary privacy in which the imagination can flourish. Then we may have something to say to each other.”

Dean also calls complacency the greatest enemy of art, with an aside about the hidden “me” in “poetry”: “It is also worth entertaining the notion that the least important time in any workshop is when your own work is being talked about. It’s called ‘Poetry Workshop,’ not ‘Me Workshop,’ after all. The imagination wants to say something you can hear and often what you say about someone else’s poem is exactly what you need to hear about your own. The way in is to go out.” Clearly Dean Young has trafficked with a few poets in his day. Self-promotion (while pretending not to self-promote) is the name of the game.

As for examples of reckless poems, they are few and far between, given the brevity of the book. It’s more Young providing the Old history of imagination’s resistance. All in all, equal parts cheerful and depressing. Cheerfully, you might wing it next workshop or on-line critique group, even though you know the mavens of tradition are waiting in the wings to nitpick your punctuation, your grammar, your syntax. On the other hand, he warns, sometimes reckless art is bad art.

Great. Just when I was beginning to take wing and feel the exultation of freedom, I get the overheating rays of the sun again, melting my wax. You can write bad poetry conventionally OR unconventionally, I’m afraid. The World of Art takes no prisoners, even in a minimum-security prison like Recklessness.

This is a reprint from two years ago. Rereading it, I’m amazed that nothing (spare the year) has much changed. What’s the […]

The future is an interesting beast. It is always “out there” and yet nearby. You don’t know when it will arrive, just […]

Good news for the poetry world: Garrison Keillor is back with his daily dose of The Writer’s Almanac, which you can subscribe to […]