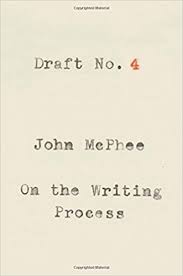 Just finished John McPhee’s newest collection of essays, Draft No. 4, and though it’s not a writing advice book per se, it does contain its fair share of writerly wisdom, many of interest to poets. Here are some quotes from the book along with comments from the peanut gallery.

COMMENT: This is not McPhee, actually. It’s Ben Jonson. I agree, though admit I’ve been only writing poetry the past few years. Jonson must mean “in his lifetime,” then. No, really. The point is well taken. And I do dream of novels still. They wake me up.

COMMENT: Also not McPhee, but his boss, New Yorker editor William Shawn. McPhee was amazed at how much time Shawn was giving to McPhee’s article as the New Yorker hurtled toward a deadline. Shawn’s coolness under pressure and unrelenting attention to revision and detail sent a message. Don’t rush. Too many writers want to be published more than they want to write–and writing is rewriting first, then doing it right (editing, proofing) second. Hold, hold, hold before you send!

COMMENT: Brilliant! McPhee’s strategy is to tap into our natural tendency to complain, so why not complain about the project that’s blocking us? If you’re struggling with a poem, it works just as well. You write to Mom and go on and on about the imagery and the word choice you’re trying and before you know it, you’ll be trying new imagery with new words because, well, you’re one eloquent whiner, aren’t you?

COMMENT: This is from the chapter called “Omission,” where McPhee reminds us that what we choose NOT to write (or choose to take out when revising) is often more important than what we put in. Amen, brother.

COMMENT: Also from “Omission.” For poets, the white page or monitor replaces “block of stone” and the word “poem” replaces “statue.” The more words on the cutting-room (reviser-room) floor, the better.

COMMENT: This, from the title essay, is where McPhee tells us that the lion’s share of time in writing goes to the awful first draft. Subsequent drafts go a bit smoother and faster, but only if you suffer through that all-important first draft. My only add would be “I wish” to the “Draft No. 4” part. I feel most of my poems go to “Draft No. 44.” What can I say? They’re attention hogs.

As for poets, too many claim “block” because they’re not brave enough to write a first draft. It’s garbage, they think. An embarrassment. But who’s going to read it? Only the author. And even if it’s three pages of garbage, there may be one twenty-dollar bill in the mix, accidentally thrown out with the overcooked chicken divan. Find it! Cash in! The nucleus of a poem is born!

The best cure for writer’s block is the writer herself. Consider, writer, your field of expertise. Within the goal lines you will […]

While I wait for my summer reading books to coalesce from library orders and online book orders, I must first worry about […]

Galway Kinnell once said, “The secret title of every good poem might be ‘Tenderness.’” David Kirby must have been listening. Check out […]

No Comments “Mommy Dearest vs. Writers Block (Like Godzilla vs. King Kong!)”