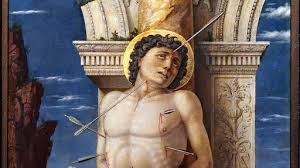 In honor of the passing of Tony Hoagland in October, I’m sharing “Arrows,” with its allusion to Saint Sebastian and his arrow-ridden body. The arrows in Tony’s case, of course, would be the cancer that eventually took him. But for others, the arrows could metaphorically equate to many things that torment us, body and soul, causing us, too, to look up, as if nothing on this earth “was ever real”…

When a beautiful woman wakes up,
she checks to see if her beauty is still there.
When a sick person wakes up,
he checks to see if he continues to be sick.
He takes the first pills in a thirty-pill day,
looks out the window at a sky
where a time-release sun is crawling
through the milky X ray of a cloud.
* * * * *
I sing the body like a burnt-out fuse box,
the wires crossed, the panel lit
by red malfunction lights, the pistons firing
out of sequence,
the warning sirens blatting in the empty halls,
and the hero is trapped in a traffic jam,
the message doesn’t reach its destination,
the angel falls down into the body of a dog
and is speechless,
tearing at itself with fast white teeth;
and the consciousness twists evasively,
like a sheet of paper,
traveled by blue tongues of flame.
* * * * *
In the famous painting, the saint
looks steadfastly heavenward,
away from the physical indignity below,
the fascinating spectacle
of his own body
bristling with arrows;
he looks up
as if he were already adamantly elsewhere,
exerting that power of denial
the soul is famous for,
that ability to say, “None of this is real:
Nothing that happened here on earth
and who I thought I was,
and nothing that I did or that was done to me,
was ever real.”