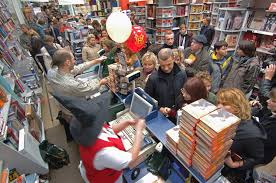 PROLOGUE: I wrote this way back in the late spring of 2016, after my first book released. For some reason, I decided against publishing it because it cut too close to the bone. Today, with two books to my credit, I better appreciate the humor in it. If you can’t laugh at yourself and the crazy pursuit of poetry writing, what can you laugh at? Ha-ha. Enjoy. Especially if you’re a poet or a would-be poet. A reader of poetry, you say? A little insight for you. And hopefully a chuckle or two.

Everything happens in stages. I learned this in the Self-Help aisle. I couldn’t help myself. And now I’ve discovered it is true of first-time authors who publish first books. Not just via my own lens, but by studying other authors of first-time books. And though I call it “The Six Stages of First-Time Authorship,” I might as well call it “The Sick Stages of First-Time Authorship.”

Admittedly, results are skewed. Mostly, I examine first-time poetry books, meaning it’s a special subset of authors whose works, in 99.7% of all cases, never see the light of a bookstore bookshelf. Instead, the books sit on a dark, unchecked (except by the author–every day) shelf of Amazon. A dot all-is-not-calm bookstore.

Holy Toledo Ohio, my book is out! And no, Ma, it’s not from some cheesy vanity publisher. It’s the merit system. Go-o-od stuff. Told you so, doubters! Confucius would be proud! Must tell everyone I know! No, no. That’s too obvious. Must tell everyone I don’t know, too! How do I spread the word without seeming to spread the word? Show me the way. I’m there. I’m a worker bee. I’ll do the social media scene, even. I’ll send you a copy if you write me a review. What’s more, I have this feeling that some big reviewer from some major paper is going to stumble upon this book (God works in mysterious ways–and, part-time, for me!) and decide to write it up. The darkest of dark horses, this book! It’s only a question of who (The New York Times Book Review?), where (page 37? I’ll take it!), when (give it three weeks, tops!), and how (Kismet)! Woot!

I’ve sent copies to every relative I know (one, “Aunt Irene,” I made up). And friends (some “acquaintances,” really, but whatever). They, in turn, will suggest this book to people THEY know. And on Goodreads, many of my friends (whom I’ve never met) have marked it as “To Read.” YES! All of these “To Reads” will soon convert to 5-star reviews once they’ve read it, I’m sure. OK, OK. I’ll be a big boy about a few 4-star reviews because that’s how I am. Magnanimous. Give it a week. Or two tops. The book is only 72 pages, after all. So that’s around 32 reviews right there. In the bank! Right out of the gate! And everyone knows reviews beget reviews like Biblical people begat Biblical babies. Can you say  “catalyst”? Can you say “momentum”? Can you say “royalties”? Ka-ching!

I’ve been checking those Amazon sales stats every few hours and hey, not bad, especially in the category of POETRY>CONTEMPORARY>REGIONAL>LIVING(MARGINALLY)WHITE MALES>STAGE 3. (Surely it can’t just be the 3 out of 87 people at the office who said they bought it after I group e-mailed the entire company. Twice.) And all 32 of those “To-Reads” on Damn-Good-Reads? I got one review out of them so far. But it’s just the beginning, I’m sure. Almost sure. Even tsunamis start somewhere. As is true with them, a little lift would do me good…

Holy sinking Amazon jungle mud! I’ve never seen sales stats sink so fast. By the day, even! And the number of “To Reads” on Goodreads has held steady. OK, to be honest, it’s down one. And the number of reviews has held steady, too: one (Cue Three Dog Night: “ONE is the loneliest number that you’ll ever see…”). And the number of “Currently Readings” is steady, too (Zero Mostel would understand). I sent reviewer copies weeks ago and followed up with “Did you get it…?” e-mails just like I’m supposed to. Marketing Man! That’s me. The guy listening to Simon & Garfunkel’s “Sound of Silence”! Is this all there is? Doesn’t a man get rewarded for his hard work (marketing) and brilliant ideas (writing)? Or is that a Horatio Alger myth or something?

Well, THAT was fun (not). Back in Stage Two some party crasher said the only money poets make is at readings where, if they’re lucky, two people might buy their books. Might. “Yeah,” I thought. “But my book is different because it’s by ME and, last I checked, I’m special.” Or so I thought. (OK, I don’t want to think. Too much. Because it’s getting me down. And yes, the Buddha would be very disappointed in me. Too much self. Just a hyphen away from -ish, he’d say. Or something clever like that, damn him.)

All this time dreaming. All this time beating the hollow drum. A couple of months lost! A couple of months I could’ve been writing! You know: Book Two. As in “Lather. Rinse. Repeat.” As in “Do it again, only better.” It’s what writers do. And the second time around (one hopes), no more stages. Just back on the saddle and writing again. It’s all that matters. Writing. Every day. In the words of another poet — one of Biblical proportions — “All the rest is vanity, a striving after wind….”

Nota Bene: After Book Two, I’ve learned. I started writing right away. I am no longer a self-deluded man. Of course, every poem hungers readers just like you hunger for chocolate chip cookies, but reality is a good teacher and writing is a good habit and joyful challenges are the stuff of our workaday lives. On to #3!

My day-to-day work, see, is reading manuscripts, so you can see what put me on to publishing–my day job. By night I read Ted Hughes, my favorite poet, particularly his crow poems. The conjunction of bright idea (day) and Ted’s crows (night) put me on to this novella in verse…kinda, sorta verse.

We got the tough job. We had to suspend our disbelief and pretend our mum was dead, and we were just little ones. Dad was a bit of a stereotypical bumbler. You know. Male of the species. Looks cute at our age, looks pathetic at his, but we got by. With a special helper, that is.

In this book I play antagonist, trickster, goad, protector, therapist, and baby-sitter. I know because the inner flap tells me so. (Ted Hughes or no, crows aren’t all that clever.) Here I make KRAAH noises. No caws for concern. Strictly KRAAH. And I am as clever as a shaman, or would be if I knew what a shaman is. I’m a CROW, for godssake.

Sometimes I get a little tipsy with wine–OK, a lot–and pass out, but that sort of thing is cool if you have a crow in the wings.

Once he had a little missy over–you know, once he had observed a respectable amount of time grieving over his dead wife–and I got to mimic his noises after missy left. KRAAH!

What a smelly, oily voyeuristic nuisance! But he’s the book’s conceit, so I endured it.

Boys will be boys. That’s all we had to do here. That and collect pity like Oliver collects alms. It was rather fun. We missed Mum, yes, but we had a wonderful time breaking rules and making a mess of the place. The crow looked the other way. Or said, “Carry-on, lads” like a proud Mary Poppins.

I allowed Sylvia Plath to be mentioned a few times, but I have my limits. Beyond that, only TED talk. Clever as hell. Unique. Not that wonderful, writing-wise, but different, and difference can take you a long way in the publishing world of Stepford novels. And Stepford poetry. Plus, it was Hughes’ idea, really.

“Krickle krackle, hop sniff and tackle, in with the bins, singing the hymns.” That’s one of my lines of poetry. You must admit it’s wonderful, mustn’t you?

I like the Russians and James Joyce. I read lots of books and was quiet growing up. I sound a lot like a Goodreads prototype, really, which is why my book is so appealing. Also, there’s that appeal to pity thing. So don’t start with the logical fallacies, will you? I have a crow and I’m not afraid to use it.

A fast read, gentle readers. And amusing. With some decent lines. And a wonderful conceit that builds on another poet’s wonderful conceit, which stars my favorite conceit! Me! Playing Grief personified (black, get it?)! With feathers! How could I not answer the casting call?

We think we heard Dad say you should rent it at the library vs. buy it, but the crow said KRAAH really loudly so it wasn’t clear. Crows know things. About royalties, even.

Buy it. Everybody loves crows. And royalties. And the little guy. And widowers with two devilishly innocent boys. It’s as good as a puppy, methinks. Do you suppose I’d waste my time inside a book otherwise? Max Porter’s Grief Is the Thing with Feathers is recommended! Even for non-poets (of which there are a few, I hear). KRAAH!