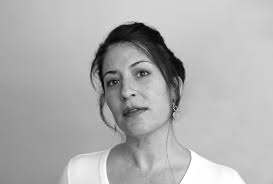 Ada Limón’s book, The Carrying, is divided into three parts, and those who believe you should save the best for last will be pleased to hear that the strongest set of poems hide behind Door #3, the stretch drive.

Thematically, it covers—in its own novel way—such well-trodden territory as love, nature, sickness, sexuality, feminism, horses, and death. I might add “time,” but there’s something in my head saying, “Same as death, brother.”

The first poem from section 3 I’ll share shows Limón’s talent with description, specifically the way she can weave concrete observations from nature into more abstract ones about life:

Instructions on Not Giving Up
by Ada Limón

More than the fuchsia funnels breaking out
of the crabapple tree, more than the neighbor’s
almost obscene display of cherry limbs shoving
their cotton candy-colored blossoms to the slate
sky of spring rains, it’s the greening of the trees
that really gets to me. When all the shock of white
and taffy, the world’s baubles and trinkets, leave
the pavement strewn with the confetti of aftermath,
the leaves come. Patient, plodding, a green skin
growing over whatever winter did to us, a return
to the strange idea of continuous living despite
the mess of us, the hurt, the empty. Fine then,
I’ll take it, the tree seems to say, a new slick leaf
unfurling like a fist, I’ll take it all.

The title poem is in section 3 includes a little projection between woman and horse. This is that rare instance when a poet (not known for Fortune-500 incomes) owns a horse (a small fortune or 500 to own, they say):

The sky’s white with November’s teeth,
and the air is ash and woodsmoke.
A flush of color from the dying tree,
a cargo train speeding through, and there,
that’s me, standing in the wintering
grass watching the dog suffer the cold
leaves. I’m not large from this distance,
just a fence post, a hedge of holly.
Wider still, beyond the rumble of overpass,
mares look for what’s left of green
in the pasture, a few weanlings kick
out, and theirs is the same sky, white
like a calm flag of surrender pulled taut.
A few farms over, there’s our mare,
her belly barrel-round with foal, or idea
of foal. It’s Kentucky, late fall, and any
mare worth her salt is carrying the next
potential stake’s winner. Ours, her coat
thicker with the season’s muck, leans against
the black fence and this image is heavy
within me. How my own body, empty,
clean of secrets, knows how to carry her,
knows we were all meant for something.

While on the theme of horses, it’s quite an exercise in creativity to compare spontaneous love with the birthing foals: ready to go; microwaved in the momma, practically. I like the leap! Even more fascinating, she gets away with using a “thou-shalt-not” word in poetry, “liminal.” Is she on a roll or what?

What I Didn’t Know Before
by Ada Limón

was how horses simply give birth to other
horses. Not a baby by any means, not
a creature of liminal spaces, but already
a four-legged beast hellbent on walking,
scrambling after the mother. A horse gives way
to another horse and then suddenly there are
two horses, just like that. That’s how I loved you.
You, off the long train from Red Bank carrying
a coffee as big as your arm, a bag with two
computers swinging in it unwieldily at your
side. I remember we broke into laughter
when we saw each other. What was between
us wasn’t a fragile thing to be coddled, cooed
over. It came out fully formed, ready to run.

And finally, politically speaking, the following sacred object. As a man, the thought of some asshat verbally assaulting you while you’re gassing your car is, well, as foreign as Mars. Reading this poem, especially in this post-Kavanaugh hearing air, gives men a taste of life on Venus, and it’s a bit nauseating.

My mother, who brought up four sons, always said, “Any man who hits a woman is not a man.” I think we can extend her wisdom from physical to verbal applications. Real men treat women with respect. In every way. Period.

I’m driving down to Tennessee, but before I get there, I stop at the Kentucky state line to fuel up and pee. The dog’s in the car and the weather’s fine. As I pump the gas a man in his black Ford F150 yells out his window about my body. I actually can’t remember what it was. Nice tits. Nice ass. Something I’ve been hearing my whole life. Except sometimes it’s not Nice ass, it’s Big ass or something a bit more cruel. I pretend not to hear him. I pretend my sunglasses hide my whole body. Right then, a man with black hair, who could be an uncle of mine, pulls by in his truck and nods. He’s towing a trailer that’s painted gray with white letters. The letters read: Sacred Objects. I imagine a trailer full of Las Virgens de Guadalupe—concrete, or marble, or wood—all wobbly from their travels. All of these female statues hidden together in this secret shadowed spot on their way to find a place where they’ll be safe, even worshipped, or at the very least allowed to live in the light.

Great stuff. A poem every man should read, especially the wonderful line “I pretend my sunglasses hide my whole body,” which originally included the unnecessary add-on, “and I’m made invisible.” The other minor revision I liked was the alliterative change of “secret shadowed place” to “secret shadowed spot.”

May Ada and all women, too, be allowed to live in the light.