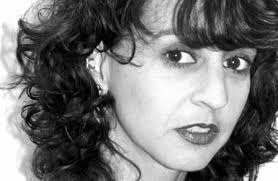 Even amending the question helps but little: What are poets who are getting published writing about?

There is no way one can gain accuracy via a random sample. They’re all too…random. That said, randomness can provide some indications, anyway. And count me curious (thus, this post), because I’ve often noted a chasm between some of my favorite topics and what poetry editors seem to like best these days.

Put it this way. If I were a contestant on Jeopardy!, I wouldn’t fare so well on popular culture topics, and I suspect modern poetry loves popular culture more than I do.

For my sample, then, I turned to the most recent issue of Rattle, a popular poetry magazine that features “approachable” poetry. Better yet, the Spring 2020 issue features a special section dedicated to students of the poet-teacher Kim Addonizio (pictured above). It’s called “Tribute to Kim Addonizio & Her Students.”

(And can we interrupt this broadcast to say just how much better these poet-students’ odds for publication became thanks to this oh-so-specific condition? I mean, c’mon. I’ve written Editor Tim Green about having a special section for former 4th-grade students of Mrs. Ann Wilcox in Cowtown, Connecticut, in some future issue. Instead of competing against… basically everybody… I’d need only best a handful of historic writer sorts who traveled through Mrs. W’s storied classroom!)

But where were we? Ah, yes. A list of topics chosen by the 17 Addonizio-trained poets. As noted, it’s a doubly good sample because a.) they were trained by a top name, contemporary poet, and b.) their work was selected by editors of a paying poetry market (“paying” and “poetry market” being such strange bedfellows these days).

Care to play along? Let’s see how you do as I see how I do! Are their topics similar in many ways to yours? Or are you writing just a few too many poems about the Reformation in 16th-century Germany?

Accepted and published poem is loosely about…

I’m not sure how the “popular culture test” works here. Maybe this: Could these poems be developed into reality TV pilots that people would watch? Well, there’s sex, love, despair, death, travel, politics, social networks, coffee baristas, pets, mothers-and-children, alcohol, and, of course, self.

The stuff of traditional poets like, say, Frost? Not so much, really. The topics seem to be more immediate, contemporary, familiar. Ideas that could easily segue into features for popular magazines.

Can we learn from this? Perhaps. It seems the overall notion of sharing your life more openly—a prerequisite of life online— is a good thing, at least for poets aiming to get published.

In that sense, poetry is a reflection of our times, where folks upload not only pictures of their cats, but pictures of what they are eating for dinner, where (jealousy alert!) they are traveling, and (wait for it!) themselves via the now-hackneyed selfie.

Popular culture, then. Out of the confessional box and into open air. Only poetically. Then submit and like your odds a bit more!