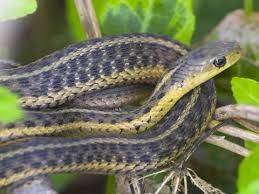 According to Christian Wiman, “the hunger that gives rise to art must be greater than what art can satisfy.” That alone says it all for me: Art as the itch that can never entirely be scratched.

But Wiman keeps going: “The hunger must be other than what art can satisfy. The poem is means, not end. When art becomes the latter, it eventually acquires an autonomous hunger of its own, and ‘it does not wish you well.'”

By way of example, he offers a “simple” (if such exists) poem by A. E. Stallings that reminds me of Emily Dickinson’s narrow fellow in the grass:

Momentary
by A. E. Stallings

I never glimpse her but she goes
Who had been basking in the sun,
Her links of chain mail one by one
Aglint with pewter, bronze and rose.

I never see her lying coiled
Atop the garden step, or under
A dark leaf, unless I blunder
And by some motion she is foiled.

Too late I notice as she passes
Zither of chromatic scale—
I only ever see her tail
Quicksilver into tall grasses.

I know her only by her flowing,
By her glamour disappearing
Into shadow as I’m nearing—
I only recognize her going.

This narrow fellow has rhyme that a 70s Swedish pop band could love: ABBA, etc. It also is a neat exercise in description. But what I like best is how it could work as a description for a person, too—one with her defenses (“links of chain mail”) always up, one who is beautiful (“aglint with pewter, bronze, and rose”), one who is transient (“Too late I notice as she passes”) and fleeting (“By her glamour disappearing / Into shadow as I’m nearing”).

Indeed, for some people, the beauty and the attraction lie in never getting to know them very well. Their appeal lies as much in mystery as beauty. If snakes were as obvious and common as worm-seeking robins tilting an eye on the lawn, I dare say poets would not write rhapsodic about the rare moment they are seen, exiting stage left.

As a final note, a tip of the hat to snakes’ wisdom. To run when man approaches is not a bad policy to follow in life. I feel the urge to flee myself, each time I read the newspaper.