As a teacher, I often made use of the brief riches to be found in two sources: poems and short documentary films. Preview, prepare writing or discussion (or both) prompts, show, and turn it over to students.

For me, The New York Times’ “Film Club” series was an indispensable source of watch-and-write material. Most often the “write” was a Film Club Journal entry, but other times it was the gateway for an essay or poem or opinion piece.

As an example, consider the possibilities in the 7-minute documentary film called “Sanctuaries of Silence.” It tells the story of Gordon Hempton, an acoustic ecologist (of all things) who goes out with sensitive listening devices and records the sounds of silence.

But hold on there. Let’s redefine first, an always fruitful assignment for students. Don’t let them assume or forever fall back on denotations. For creative purposes, pick an intriguing word and have them redefine.

Hempton redefines silence as the absence of human-made sounds. For him, sounds of the natural world alone don’t count as “noise.” No, noise pollution—that is, the product of the human race—rates as true “noise,” and it’s harder and harder to escape from it (think of planes passing overhead, even in the most remote of locations).

For student writers, going outside and putting their senses on high alert is good practice, whether it is a man-made setting or a natural one. In this case, it is sounds they would focus on and record in notebooks, but certainly it could be sights, smells, tastes, and sensations of touch as well.

Identify? What’s making that sound? If you think the exact source and its name is easy, just try identifying it. Hunting down the source of a noise is not always easy. Even crickets can grow shy when you get close enough, and does your average writer know the difference between a cicada and a katydid, a wood thrush and a yellow warbler? How about an urban setting? Manmade objects have specific names, too.

There’s an exact word for everything, all right, and specific nouns, along with active verbs, are the muscle and bone of good writing, no matter what the genre.

Starting with film or poem or both always makes for excellent writing kindling. Students love them, too, and they don’t eat up a lot of class time, so there’s a lot of educational bang for your instructional buck.

Not a teacher? Be an autodidact. Put that notebook to good use. Redefine, sense, identify, and write! 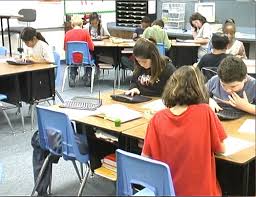 For reasons that border on unreasonable, elementary-aged students love poetry (usually rhyming) and middle- and high school-aged students detest it (especially when they are tested on it).

Perhaps this is because of stodgy assigned works from textbooks and/or old warhorses that continually get trotted out as assigned readings. Perhaps it is because students are often forced to scan and interpret a poem before they are allowed to (radical thought) enjoy it.

Matthew Zapruder is on record for saying that students only need one tool to understand poetry: a dictionary. I wrote an entry on his theory, but I’ll take it one step further. Students need an open mind beside that dictionary, too. What, after all, is the success rate of a psychologist who has a patient unwilling to cooperate, or of a coach with an athlete unwilling to buy in?

Choice is nice, sure, but the trouble with bringing a class of students to the library (or of carting up Dewey’s entire Decimal of poetry books to your room) and saying, “Browse, children, and pick something you like!” is they become overwhelmed, then bored, by choice. Talking to each other makes for better poetry, as you’ll quickly discover.

No, it’s better for a savvy teacher to pre-select poems tailored to the interests of her students. Poems about teenagers, social concerns of teenagers, sports teenagers love to play. Lyrics from songs and musicals. Verse about (wait for it) school-related issues. They’re out there. In spades.

And just as students listen to songs over and over again until they’ve memorized the lyrics (first the refrain, of course), so they need to hear poems again and again. No teacher should ever be shy about reading a poem three or four times before anyone even rolls up a sleeve to dive in.

If anyone complains, just ask what happens when they first hear a new song they like. Do they wait a month before listening again? Then another month before hearing it a third time? OK, then. On the other hand, has anyone ever listened to a song over and over again, head bobbing and volume cranking, until they own it? Thank you.

Teachers need to practice reading poems, too, as if the poet herself were in the audience. The demanding poet, I mean. This is her baby you’re reading, after all. Read it right! Read it con brio, which is Latin for “with emotion” or some such.

From there, let students do the instructing for you. Put them in groups and restrict their time. Two minutes to come up with the coolest words, line, or lines and why. Assure them the why does not have to be a “poetry reason.” It can be a student’s reason. What does it remind them of or bring to mind?

They’ll do this, of course, by choosing the sharpest images and sensory details (imagery!), the neatest comparisons (similes, metaphors!), and the most ear-pleasing rhetorical devices (say, anaphora for one… only say it three times!).

Voilà! Isn’t it nice when students open a door and walk through it of their own volition? By God, these “cool” lines they choose almost always have a poetry-related name. And, getting inside the head of the poet, there’s probably a darn good reason she chose them, too.

Are there any detectives in the room?

Yes, the detective metaphor is a good one. Forget the student label. Let’s be poetic detectives. And, now that the cool stuff is out of the way, let’s take a little more time to look up words we don’t know (enter the Zapruder dictum). Every definition of the word, not just the first.

If this sounds like familiar slogging reached at last, deploy the group’s creativity. For each word they don’t know, tell the group to split up duties and write a short riff of music using the word in all of its multiple ways (or in its one unique way just learned).

Have them use online dictionaries, if they prefer. Then they can first explore and second set their ditties to a familiar tune or make a rap of it, bold-printing, underling, or italicizing the word as it shows its multiple shades.

Once they’ve shared in front of the class or just by shyly standing near their group (safety blanket method), they’re ready to don their fedoras and return to detective mode for the original poem. Which meaning fits this poem’s line? How does it help unlock meaning for what at first was a head scratcher? Now at least some reasonable theories can be floated, even if we are now on Day 2 of the activity (the singing or sharing of written songs being a good dividing point).

Speaking of, the time has come for making a statement about the poem! I always had groups co-create a thesis statement, saying what poetic tools the author used to reveal a certain truth about life (theme). Before they did so, I let them know that we would be putting each thesis before an opposing counsel and jury (classmates), one if by whiteboard and two if by projector.

The job of the opposing counsels was to poke holes in the theory. I told them the first weakness to look for in any theory was this: either that it did not apply to the poem at all (except in the overly-rich imagination of the readers) OR, more likely, that it only applied to parts of the poem (not good enough, friends).

“Any ideas about meaning have to stand up to every line in the entire poem,” I cautioned. “So be on the look-out for words and lines that bring the theories you’ll see into question. As to those of you co-creating a thesis statement for the court, you can save yourselves some embarrassment by rereading the poem before it goes before its peers, testing each line to your thesis yourselves. Anticipate opposing arguments, in other words.”

Early in the year, I engaged in this ritual umpteen times before ever assigning students the task of a full-blown literary analysis. The discussions and debates unfolding in class as “prosecutors,” “defendants,” and, ultimately, “juries” were like warm-ups. Sprints. Push-ups.

They got kids ready — truly ready — for poetry. And kids had fun doing it, too. Reading and understanding poetry, I mean. Even difficult poems. But always poems that had meaning for them.

The rest of these difficult skills will come, eventually, like a Field of Dreams no English teacher ever believed in. But first, you need a foundation. A foundation student-detectives have plenty of practice building themselves.