Yesterday, instead of building March snowmen and creating March snow angels, I wrote a post about line breaks from Diane Lockward’s book, The Crafty Poet, sharing Wesley McNair’s (pictured above) first five tips on where to break your poems’ lines. Today we have the remaining five:

#6. Break so your reader sees how to say your poem.

#7. But don’t forget the wordlessness around the poem, which can be made articulate by a line break or by an artful arrangement of lines.

#8. Break mainly on nouns, verbs, and the words that describe them; they carry the sentence’s essential meaning.

#9. In your line breaking imitate the stresses of meditation and feeling, which are present in every earnest and intimate conversation and are the true source of the line break.

#10. Believe these tips and don’t believe them. Let the feeling life of your poem be the final authority.

Very cool how the final tip becomes a disclaimer pointing back to James Tate’s quote (shared yesterday) saying, basically, “Whatever the hell. It’s your poem!”

And #9 above, by using the words “meditation” and “feeling,” brings us back to the cryptic quote about lines being Buddha and sentences being Socrates. East is East and West is West and never Mark Twain shall meet, I think my English teacher told us. (Though that may be apocryphal like a lot of things she said.)

Look back, too, on #7, which gives a shout out to negative space, the final frontier. Too many of us forget that WHITE NOTHINGNESS is a part of every poem we write. It is agreeably malleable, willing to assume any shape our words, lines, and stanzas afford it.

As for me, I lean on #6 the most. I read my poems aloud for the musicality, the rhythm, the beats, the pauses. How natural does it sound? Am I throwing emphasis around the room with no regard for lamps and other fragile items? That would be good for the poem, even if it means a little clean up afterwards.

McNair’s advice is Everyman’s version of line breaking. Trust me when I say you can read scholarly works even on supposedly “free verse” which advocate all manner of “un-free” design in your freedom.

There’s fancy names for that, too. Ten dollar words you pick up off academic floors. But I’m not going there. One, because I do not have time; and two, because it’s too early in the morning to hurt my brain.

I’ll leave well enough alone, then, and wish you all a Ruby Tuesday…. 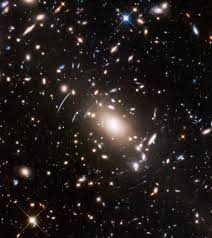 Poetry is ever-evolving. Sometimes what looks new (read: “prose poetry”) has actually been around a long time (read: since the 1840s). But what about space in the middle of a line? I see more and more of it. What does it mean? You can’t look it up in your Poet’s Glossary. I mean, where would you search? An entry for “line”? For “space”? For “blank”?

Maybe it’s the cool thing to do in poetry, like the latest fashion or name brand being worn by the popular kids in middle school. I don’t know. I am, as usual, behind the curve. Bewitched and bewildered. Late to the party.

So let’s try to figure it out together. Here is a segment from the title poem of Meghan O’Rourke’s collection, Sun in Days, which I have been reading this week. I’m enjoying a lot of her work in the book, but some of the poems do this…sudden space thing. It’s like “we interrupt this poem to do the Star Trek space-the-final-frontier thing. We will get back to our regularly-scheduled line as soon as Scottie beams words down.”

from Part 2 of “Sun in Days’ by Meghan O’Rourke:

The pond near the house in Maine
where we lived for one year
to “get away” from the city        the pond
where the skaters        on Saturdays came,
red scarves        through white snow,
voices drawing near and         pulling
away, trees against the clouds.

My first thought was, “Ah. It’s a line break in the middle of a line, so as to avoid overly-short lines!” It was a Eureka moment. In O’Rourke’s lines above, this theory seems to work in the fifth line where you might not want to see a two-word line such as “red scarves.”

Or maybe the whole purpose of the space is to signal the reader to pause. This theory looks reasonable in line 3 where the gap between “city” and “the pond” serves as a logical place for a comma, perhaps. The problem with the theory, though, comes with line 4. Why would a reader pause between “skaters” and “on Saturdays came” when they logically flow together?

Is it like concrete poetry, then? Do we connect the white space to form something pleasing to the eye, a treasure-map secret to the poem’s meaning, possibly?

But, to be boy-scout honest, I’d be doing it without a clue. Kind of like when I attempt a ghazal, which sounds too much like a poem running amok on the Serengeti.

Anybody care to enlighten me        with a theory?