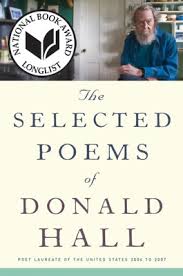 While reading The Selected Poems of Donald Hall, I jumped to the “Postscriptum,” where Hall offers up some thoughts on poetry writing — and especially on poetry sharing with someone who could give competent feedback. In Hall’s lucky case, he was married to that person, fellow poet Jane Kenyon, until she died of leukemia at the ridiculously young age of 47. What follows are selected bits from Hall’s P.S.: